In our home this is an everyday phrase.  A more than a few times a day phrase.  Sometimes it is said with a smile, often with a sigh and usually by me when HB (HoneyBunny) can’t find something.  Take his glasses for instance.  No, I don’t really mean take them – he’s already wondering if I took them – or hid them – or sold them.  I mean for example.


HB has at least six pairs of glasses, some of which he prefers over others.  He can rarely find any of them.  They hide out in those mysterious spaces only glasses know about.  More times than not, they finally make themselves visible again so he can read his magazine or drive his truck.  “I found them,” he’ll tell me.  “Where were they?” I’ll answer.  “On my nightstand under a book,” he’ll respond…or…”In the door pocket of the car”…or…”In the bathroom.”  Name a place and his glasses have most likely found their way there! 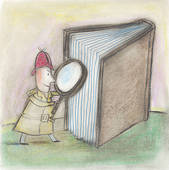 One time his truck keys disappeared for weeks.  We were ready to see about getting new keys made when LuLu came to clean house.  While vacuuming she tipped over (on purpose) HB's favorite chair and when she set it up right again, the keys fell out.   A miracle, I tell you!  It's just amazing that they could have stayed hidden all that time.
Then, there is the cell phone vanishing act.  It is almost a weekly event.  One we can count on.  “Honey, will you please call me so I can find my phone?” he’ll holler.   We may find it in that same overstuffed chair, down in the little space between the arm and the cushion, or in one of the vehicles, or under the bed (I haven’t a clue about that one), or much, much later find it by accident because it was turned off the whole time and we couldn’t hear it.  Sigh… 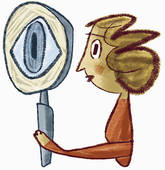 Now, I don’t want you to get the idea that HB is the only one who loses things around here, but since I am writing this and I rarely see the humor when it is me looking for things, I am going to skip that part for now.  You understand, don’t you?
It’s a documented fact (by me) that I am married to a PackRat.  Everything is kept, just in case it might be needed for who-knows-what & who-knows-when.  Just in case.  But there isn’t a place for everything.  Instead, we have some chaos going on here.  Some rooms resemble the hoarding shows on TV (not really that bad, but it sounds more dramatic).  You see, HB loves books, is addicted to books, isperhaps even a book hoarder.  He owns hundreds of books.  He even reads a few of them.  But, in the last few years, focusing on a book for any length of time has gotten harder due to his sleep disorders.  Still, the books keep finding their way into his cart at the Thrift Shops and later into our house.  They soon become orphans destined to sit on the floor until they are in the way, and then relagated to a box and sent to storage.  Poor things.   Call me a detective, but I am guessing this just might be the answer to the mystery of the lost items.
I am thinking that we are probably not the only ones who go through this losing stuff/finding stuff scenario daily. As we age, our brains lose some of that important gray matter needed to recall where we placed our treasures and necessities. It is part of getting old – perish the thought!  I am thinking that we should find a way to count these times as blessings instead of being frustrated and muttering to ourselves. Yes. I believe I’ll work on that. Yes.  While I am down on my hands and knees searching, I will use that time to say a few words of thanks and praise for being in such a situation. And, I will feel better.